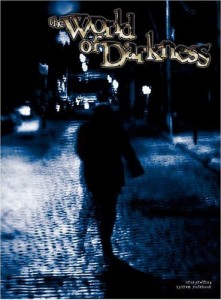 This is obviously not a new product, as it debuted at GenCon ’04, but it is the first book I have taken the opportunity to re-read since I have started the Labs.  After reading it completely (for the second time), I found myself motivated to write my first in-depth review.

I was at the “End of the World of Darkness” party they hosted in the Arts Garden over downtown Indianapolis after the announcement of the Time of Judgment at GenCon ’03.  It was an open bar and we got to chill and hang out with the designers, writers, and staff of White Wolf.  Needless to say, it was awesome and I was plastered.

Then in August of 2004, White Wolf Studios released the new version of the rules, dubbed the Storytelling System with this book.  But before I delve into the miasma of how the new system is different, for better or worse, than the old system, I want to discuss the book from the perspective of someone new to the game.

The World of Darkness is set in a dark reflection of our own world, if you saw it through the worn, pitted and scratched mirror that rests in the dusty attic of your grandmother’s house.  It is a modern day version of this world where things are just a shade bleaker and the shadows just a shade darker.  The most interesting thing is that all the imagined things we fear in those dark shadows are real in the World of Darkness.

In the World of Darkness, you play an ordinary mortal who is confronted by the entities hidden within these dark shadows.  As you seek to uncover the answers to the mysteries that you encounter, you really only uncover more questions.  You only hope that one of the answers to your questions doesn’t end your hunt for the truth prematurely.

White Wolf markets the World of Darkness as a storytelling game of gothic-horror, or gothic-punk.  Theme, mood, and plot take precedence over combat and mechanics.  The goal of the Storytelling System is to bring a troupe (as a group of WoD players are called) together and weave a dark and gritty story of supernatural horror.  A designated Storyteller, or ST, moderates the story and the rules are merely there to determine the outcome of critical actions.

Each game session has scenes which compose a chapter or act in a story, and several stories make up a chronicle.  This parallels the more familiar progression of fantasy roleplaying that is composed of encounters, adventures, and campaigns.

However, I believe you could use any [popular] set of RPG rules and use them as directed to tell an excellent story.  The success of storytelling is dependent on the moderator, or Game Master, and the players.  So the question is, what does World of Darkness bring to the table that assists the creation of supernatural thrillers?

I believe the answer to this question is setting.  You may call it what you like: flavor, fluff, flatulence, etc.  But White Wolf excels at embedding their rule books with a significant amount of intriguing short stories.  These writings were very good at capturing my imagination and lead to instant plot hooks.

The first handful of pages are short narratives that usually mimic journal entries or reports and reveal just enough information to hook you, but not enough to spoil the mystery.  Any of these stories could provide the foundation of a horrific story if not a chronicle.

It is also called the Dot System, because each trait is measured in dots with values from 1 to 5.  You have several types of traits including nine Attributes, twenty-four Skills, and Merits.  You also have a variable amount of Willpower and Health (6-11) and a maximum of ten dots of Morality.  Attributes and Skills are divided into mental, physical, and social groups and then Attributes are further subdivided into Power, Finesse, and Resistance.

The Storytelling System rules are point-buy, meaning experience is rewarded at the end of each session and each trait has a cost that players spend experience (XP) to purchase.  As a character becomes more experienced, it takes more XP to purchase new traits, but you usually earn XP at the same rate.  This means character advancement slows down as the chronicle progresses.

Each die that rolls a value greater than or equal to 8 is counted as a success.  Five or more success is an exceptional success and therefore gains additional benefits. If any of the dice result in 10, then the player gets to re-roll them until the result is anything other than 10, and add any successes he gets to the results.

If a character has a dice pool of zero or less for a specified action, then he gets to roll a chance die.  Chance dies only succeed on a result of 10. But if a player rolls a 1 on a chance die, then he suffers a dramatic failure, which means bad things will likely happen to him.

I also believe the rules can lend themselves to drama at the table as well.  When you only have few dice to roll and you only have a 30% chance per die to succeed, you can be a little tense.  However, the drama can quickly turn into annoyance with more experienced characters as they have larger dice pools.  It can be a pain in the arse to find fifteen d10s to roll, and having that many dice hit the table at once can break the suspension of disbelief.

And consider this, I know a player that insists on rolling each die one at a time… yeah.

No game edition is not without its zealots, and the old World of Darkness (OWoD) is not any different.  Many of the complaints found are that White Wolf has done the following:

Let’s tackle the Metaplot first.  From the beginning, the World of Darkness that White Wolf envisioned is one that was plummeting quickly in a death spiral to the END.  They had actually built in an inevitable apocalypse.  The vampires had their Gehenna, the werewolves an Apocalypse, mages Ascended… I think it actually took some testicular fortitude to own up to the fate they had stitched into their games.  They actually did, they killed the WoD!

Story wise, they had really painted themselves into a corner with the Metaplot.  The Metaplot was the official background story that unfolded in the rule books and novels.  And there were very obvious inconsistencies with the story.  One problem was that the different supernatural lines were not written to be a shared world, but they eventually bled over.  Another seemed to be that no one was keeping tabs on what was written

I enjoyed the Metaplot as much as anyone else, but as creative as gamers are, do we really need one?  I think not.  Besides, if you still want to hang on to the idea of the Metaplot, create your own, modify the existing rules to fit it (name changing mostly), or keep playing the old rules.  No one is taking away your gorram rulebook!

Now on to the Difficulty of actions, or the result the die must reach (or better) to be considered a success.  In the old World of Darkness, the Difficulty was variable (usually a 6, but ranged nominally from 4-10).  I think the goal here was making the rules streamlined, but nothing is preventing a Storyteller from changing the Difficulty.

The other complaints are not really worth looking at.  If you’re pissed you can no longer play a Tzimisce, then port it over.  The mechanics should work with almost no modification.

The World of Darkness book has a solid, streamlined rule system as well as excellent writing.  I highly recommend this game if you are a fan of the supernatural, horror, or mystery/suspense.  I think everyone should try it once.

I love the classless point-buy advancement because it truly allows a player to customize his character.  There are caveats to classless systems however, as build trends inevitably appear.  However, with a good ST and Troupe, this shouldn’t be a factor.

I only wish they had included stuff from supplements like The Armory in this book.  The tightwad in me wants to see extra mechanics like those included in the core book so I get more for my money.